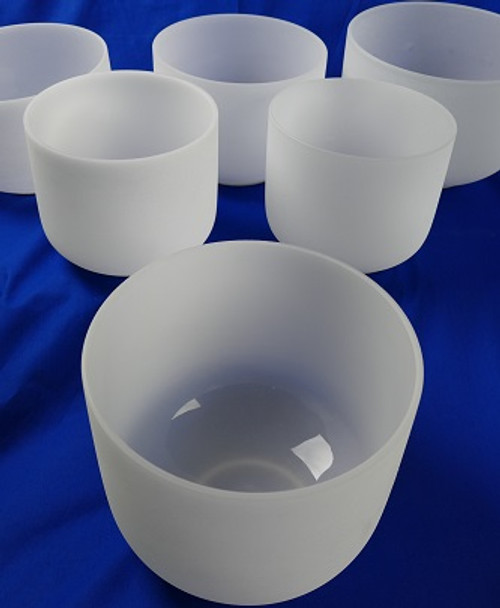 Here you will find information on the Just Intonation scale and the crystal bowl set you will receive. Please read all the information and listen to the sound files through the link at the bottom of the page. Please contact us if you have questions. Contact Us.

Just Intonation is the natural harmonic sequence of the Western musical scale. It is a natural harmonic progression that follows sacred geometric ratios of nature that correspondingly create beautiful harmonies. Many musicians believe the neurology of the body responds better to these natural harmonics, creating deeper states of harmony and relaxation, thus creating a template for deeper healing and wellness.

The Just Intonation scales is usually spoken of in relationship to the Equal Temperament scale. Equal Temperament is be the world standard for tuning at this point and evolved out of Just Intonation tuning. What happened was, in the 16th century western composers began tempering the scale, creating alternative mathematics for the notes, because it sounded better to their ears when they composed more complex music with greater musical range and utilizing multiple key changes. Fundamentally the scale had been altered away from natural harmonics. Though there is no scientific research it would make sense that this has caused our neurology to do so in like kind. Thus it makes sense that just intonation creates a more natural response of harmony in our physiology.

What Just Intonation means, simply put, is a musical scale using mathematical ratios in relationship to a fundamental note. For example, let’s say the first note in our musical scale is a C at 261hz. Then the C is the fundamental note of the scale, and all of the other notes are found through mathematical ratio to the hz value of that C. If you created a 8 note scale in this manner, you would still get a scale that sounded – Do,Re,Mi,Fa,So,La,Ti,Do – however, unlike the Equal Temperament tuning used today, this 8 note scale would all be in mathematical relationship to the fundamental and would have a greater sense of harmony.

Here, in offering Just Intonation, we are offering a more ancient version of the 8 note major scale (do-re-mi-fa-so-la-ti-do), where each note is in simple ratio to the fundamental. There is a beauty in creating scales using this pure intonation. Many believe this allows for richer and more pleasing harmonic relationships. The idea is that the brain has a much easier time processing sounds that are in simple harmonic relationship then a complex harmonic relationship. The major third (or third note in the scale) for example in the just intonation scale is simply a 5:4 ratio. In the equal temperament scale the major third is approximately 635:504. The more a tone strays from a simple ratio, the harsher it is in sound. For example, the most harmonic relationships are the 2:1 or octave, and the 3:2 or major fifth.

Here are the simple harmonic relationships of the just intonation scale we are offering:

The set that is priced out here is for a C major scale. You would receive C, D, E, F, G, A, B, high C tuned to Just Intonation tuning. You will also receive a o-ring and striker for each bowl.

The fundamental note can be either 440hz or 432hz.

440hz is the standard hz value for tuning instruments internationally. What this means is that the A note in your chakra set (the middle A) rings right at 440hz, and all the other bowls are tuned in relationship to that A being 440hz, so that the set perfectly tones to do-re-mi-fa-so-la-ti-do. This is what perfect pitch, or true tone means.

432hz tuning is if you flatten the middle A note in the set to ring at 432hz instead of 440hz, and then all the other bowls are tuned in relationship to that A being 432hz so that the set tones incrementally and perfectly to do-re-mi-fa-so-la-ti-do. This gives all the bowls a slightly sweeter tone then 440hz tuning.

We can offer a just intonation 8 note scale starting with any note, with any cent value, starting from a 3rd octave C going up to a 4th octave D, though pricing may change from what you see here. Here are sound files for scales starting in a 3rd octave G, 3rd octave F, 4th octave C and 4th octave D. Below is a video with the Just Intonation set in the key of C.

If you have any questions please Contact Us. We are happy to work closely with you to get you a set of bowls to your specific requirements. You will receive each bowl with a wand, and o-ring. All cases are sold separately