Guide To Purchasing A Gong

Guide To Purchasing A Gong

The Effect Of Gongs

Different gongs used for sound healing have similar effects. The gong is a felt sensation of vibration, that ignites the nervous system, and draws attention into the body. When attention can seep into the body with a coherence, held on bodily tension and unconscious mental energy can be released, which can help transform experience towards greater calm and understanding. The gong is as well an auditory sensation of overtone harmonics and binaural effects. The sound bypasses the thinking mind on a physical level which can allow for the release of mental forms, allowing for expansion into deeper states of coherent awareness. Everybody has a different experience with a gong and with sound.  Many will want to use the felt and auditory experiences of the gong to journey, while others would want to use the time to observe the mind. The beauty of the gong in both cases is its vibratory power.

The Types Of Gongs

Gongs sold for sound healing can generally be put into two categories. There are tuned/refined gongs, and untuned gongs. Both are potent instruments for helping transform. 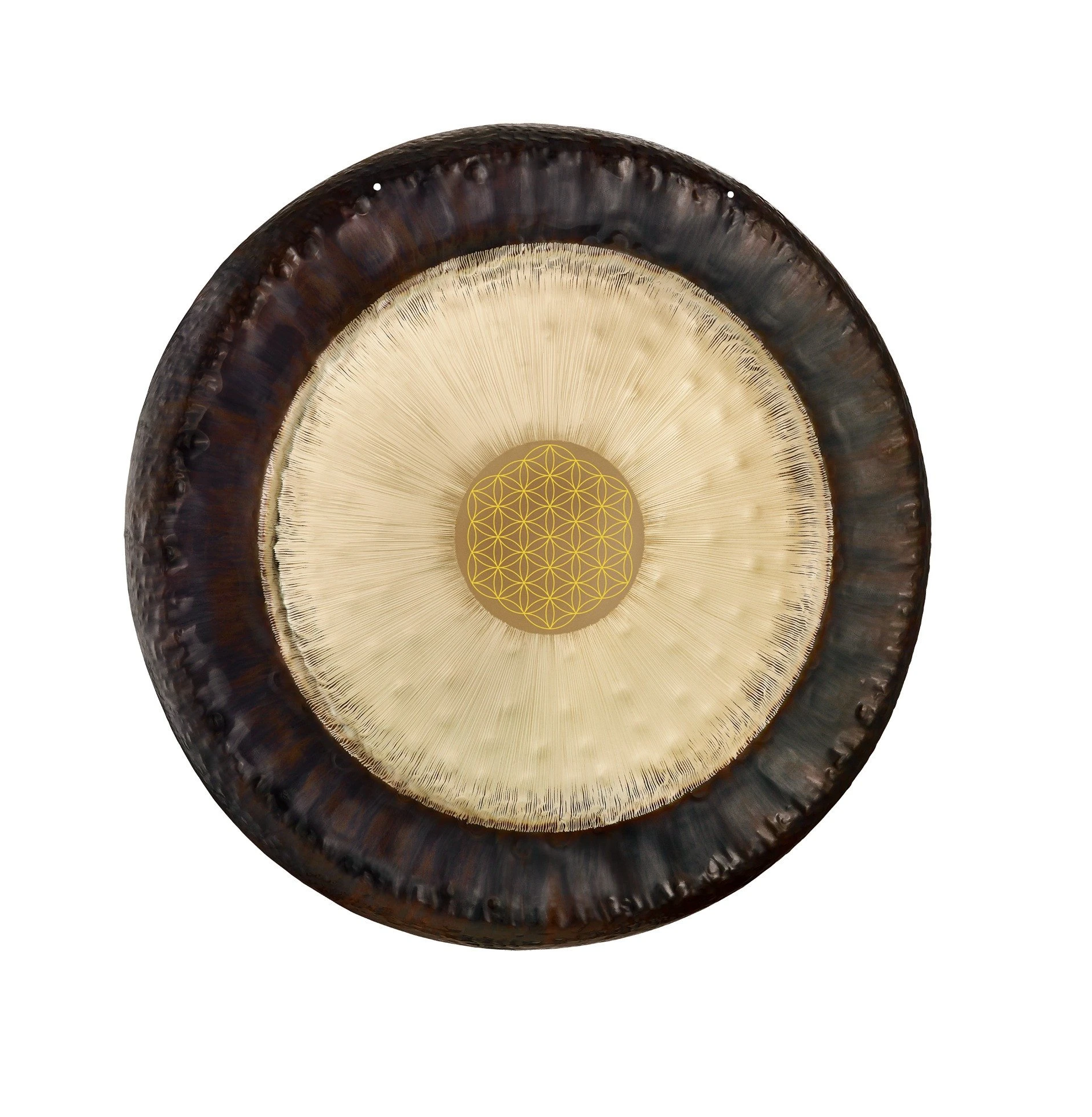 Special care is put into the hammering of tuned and refined gongs to get coherent singular notes, and predictable harmonics. Examples of these gongs are both Paiste and Meinl Symphonic and Planetary gongs.

The Symphonic gong is an example of a refined gong. It is made to be used for symphonies, which will require clear note structures within the gong.

The Planetary gongs are examples of tuned gongs, which are tuned to play specific hz frequencies as there fundamental note, so with them you have an even further assurance of what note you will be receiving with the purchase. With tuned gongs in general you can choose your gong to play in tune with your crystal bowl set, or other instruments, or with a piece of music. For example, the 24" Meinl Flower Of Life gong plays a perfect pitch 432hz C note, which can be paired with a 8 bowl or harmonic 432hz singing bowl set.

Tuned and refined gongs are typically more expensive than untuned gongs, and are typically made in the United States or Europe. They are mostly highly polished gongs with a fine mirror like finish. It is recommended, for example, to only use high quality soft mallets on tuned gongs so that you do not scratch the highly polished finish. Further, it is recommended to not hold the gong with your bare hands as the oil from your hands can mark the gong. 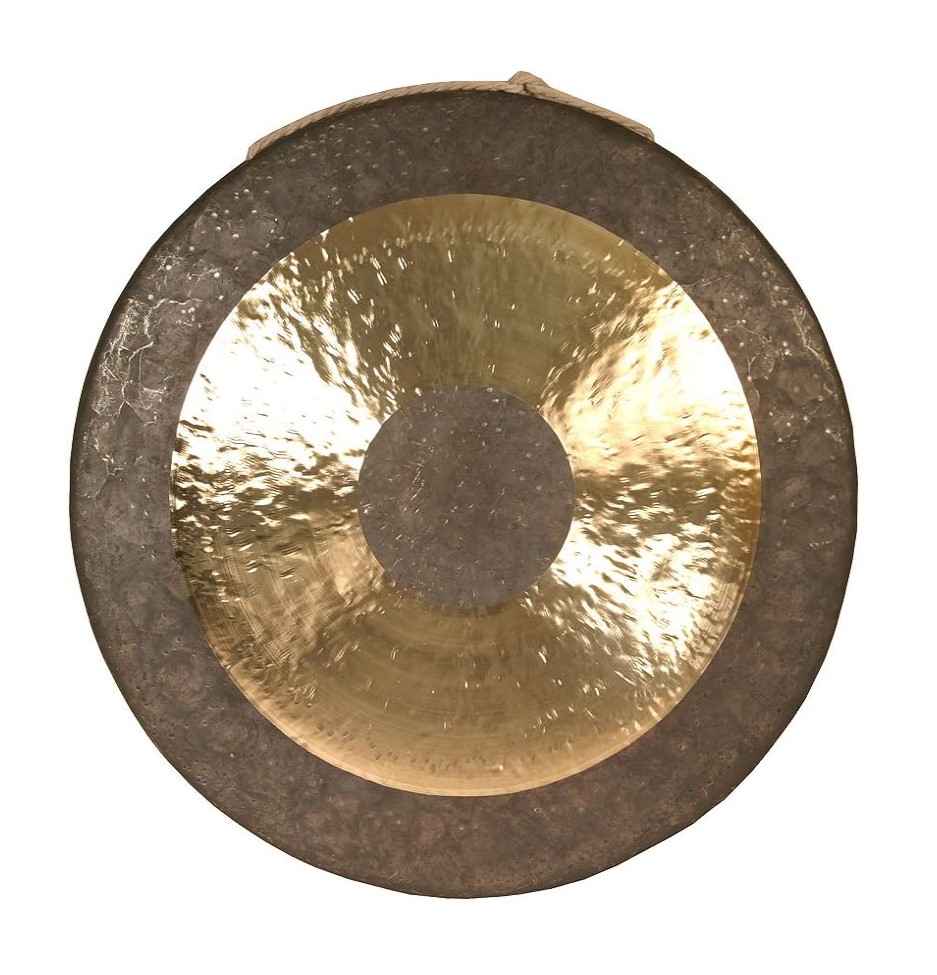 Untuned gongs are not put through an additional process of fine tuning the note of the gong. Additionally untuned gongs are generally not handpolished to a mirror finish. Examples of these gongs are the many traditional gongs used around the world, such as the classic Chao or Wind gong. These gongs give off wild and unpredictable harmonics and binaurals, depending on how they are struck. Some Chao gongs for example roar like a lion when they crash.

The Chao gong, as well as the Atlantis and Mother Tesla gongs are shaped and have lips very similar to most tuned and refined gongs, and play similarly. They have a slow build up when being struck. As you strike the gong more, and build the vibration within the gong, eventually as you hit the gong hard enough the gong with "crash" giving off a wild cacophony of notes and vibration.

The Wind gong on the other hand, is hammered almost completely flat like a plate with no lip, so that it crashes very easily, and has very little build up to the crash. When you hit a wind gong hard it crashed, though when you hit a wind gong soft, you get a beautiful deep note that is deeper than comparable sizes of Chao gongs.

These gongs are not less valuable than tuned or refined gongs for meditation, though are different, giving off both dissonant and harmonic tones. The mind and body are still very much effected by the physical and auditory experience of vibration from these gongs. In one sense, the unpredictable variety of tones these gongs produce can help participants stay focused on the experience, without the mind wandering off.

What Gong Should You Buy?

There are generally two things to consider when buying a gong, the weight of the gong, and the depth of the note. Generally gongs that are 32 inches and larger will provide for you a much richer and deeper note, with greater amount of overtone harmonics. This is valuable in meditation, for their is more sound to listen to and pierce through the patterns of your mind. The depth of the bass note can be described as grounding, or calming, leaving you with a heightened state of presence.

However, gongs that are 32 inches or larger can be too big to carry around and transport easily. They are heavy, and must be kept on a stand when playing. They can also get very expensive. Gongs that are 22 to 26 inches can be held in your hand, and carried around when playing. The bass note in this size of gong is still deep and rich, relaxing and enjoyable. With being able to carry the gong around, you can easily transport it in your car, or carry it around a room softly striking the gong around clients.

The most important aspect though is to listen to sound files, preferably with headphones on, and find the gong that you want to play. Finding the sound that calls to you and draws you in will bring the most long lasting value to your meditations, yoga sessions and ceremonies. We have sound files for almost every gong available on our website.

What Mallet Should I Buy For My Gong?

There are two types of basic mallets to consider for a gong, harder mallets and softer mallets. Harder mallets have hard cores, and are wrapped with more plain cloth material. These mallets will bring out the higher harmonics and the crash fast with a good deal of power. Soft mallets have soft cores, and are wrapped in a soft furry material. These mallets will bring out the deepest bass of your gong as the primary note. You’ll have the hit the gong more and harder to bring out the higher harmonics of the gong and make it crash. We typically recommend going with a soft mallet over a hard mallet. You’ll be able to bring out the relaxing lowest tones of your gong, and will still be able to bring out higher tones, and make the gong crash. Examples of soft mallets would be the Paiste M1-M7 mallets we have listed on our site, which are a soft core and sheep fur wrapped. Another example is the Meinl mallet, which is even a little softer than Paiste’s mallets. An example of a harder mallet would be a classic Chinese mallet, which has a harder core, and is cloth wrapped which will bring out higher tones from your gong faster. There are even much harder mallets that could be used as well.

There are three types of mallets someone should consider owning for their gong experience. The first is a basic soft or hard mallet, as discussed in the previous paragraph. The next is a pair of gong rollers. You can see the gong rollers we offer here. With gong rollers you get a pair of mallets that have small heads. They are harder mallets, with a little bounce to them, so you can quickly hit the gong one mallet after another creating a rolling effect. You can control the crash, and the buildup, very finely with this rolling method, and are able to get a more controlled, faster more exciting experience from the gong then you can with basic soft or hard mallet. You can use two of the basic mallets to do the rolling method, though the mallets will most likely be too heavy, so will be uncomfortable. The last mallet to consider is a friction mallet. These are hard balls on the end of stick that you rub against the surface of the gong. The friction between the ball and the gong creates high wailing and low rumbling sounds from the gong. Many think that friction mallets can sound very much like whales calling to each other. Each friction mallet we offer gives a little different effect. Read the product description of each mallet to learn more.

The last thing to consider with a gong mallet is the size and weight of the mallet. Meinl's large gong mallet may create a deep tone but holding it for 30 minutes may be uncomfortable. Paiste recommends certain sized mallets, generally larger mallets for larger gongs, to bring out the crash faster. But again, holding a Paiste M7 for a long time would be uncomfortable. A Paiste M4 or M5 is generally a great size for a gong mallet, and a great weight, to get a good tone from a gong and hold the mallet for some time.