Made In The USA

We only sell tuning forks made in the USA, whose manufactures have proven to use high quality metal alloys for long lasting durability and integrity of tone.

Tuning Forks For Clearing And Aligning

In general, the nature of healing has two aspects; that of clearing, or that of aligning. Most of us focus on the clearing aspects of healing:  that which needs to be cleared away, let go and released.  This tends to focus on what is not right about ourselves, what needs to be fixed.  It focuses on the wound, the trauma and the shadow.  While these may be necessary to clear, in order to see or proceed clearly, it does not provide a true aspect of healing, understanding what healing is, or what we are once we realize a state of healing.  We cannot be healed simply by getting rid of 'what is wrong' with us. We need a sharper tool or a sharper set of skills to focus on for the right outcome of healing.

Realizing what healing is assists us a tremendous amount in this pathway to healing. By realizing who we truly are, what our true nature or essence is, we can focus on this aspect of our Self (Higher Self, authentic Self,) and align, awaken, remember, or realize it, Who We Are.  Most traditional spiritual schools (from Indigenous Americas to Tibetan Buddhism, Hinduism, etc,) focus on self-realization, or realization of our true nature, as the nature of healing, of wholeness, which leads us directly to fulfillment of our ultimate or Divine purpose. By realizing this, it gives us the ability to focus on what healing truly is, on what we truly are, on what we truly want, a state of realization or fulfillment.  Everything else is entanglement, as one of the Great Masters said.

This is that aspect of 'aligning' with the higher ideals or aspects of the awakened Self. When we truly get this, and set our intentions on this desired outcome, we are much more likely to attain it. Indeed, if we do not understand what the outcome of our intentions are, or the nature of what healing is, it is very difficult to focus on it, and thus, very difficult to attain to it, though it is our inherent state.

Most instruments can assist us in one or both aspects of this, clearing, and alignment. Tuning forks are especially powerful in doing this. Certain tuning forks sets are better for clearing, and others for aligning. Binaural tuning forks have the inherent quality of clearing away energies (not wanted, or non-beneficial.) Using a binaural set of tuning forks will assist in disallowing patterns from arising. Harmonic tuning forks are excellent for alignment, awakening, invoking these ideal inherent states of true essence for awakening, realization, embodiment, integration. Harmonic tuning forks sets will create an uplifted environment, in which you can rest into, and transform or align with beneficial states of wellness.

What Hz Frequency Is Best For Tuning Forks?

Tuning forks have been used for centuries by musicians to tune instruments. Surprisingly, there are examples of people using tuning forks for healing for centuries as well, though tuning forks came into prominence as a healing modality within the last thirty years.

There are many ways people use tuning forks and many belief systems that go into using them, utilizing a variety of hz values, for example: 432hz, 444hz, 111hz, 136.1hz, 128hz or 528hz. If using tuning forks for a sense of well-being and clearing of energetic states, there is not enough evidence beyond conjecture to show that one hz value is better than another. We at Sunreed Instruments, have found that the conditions for spiritual healing are found in our own awareness, and we must learn the skillful means of utilizing our awareness, rather than relying on a specific frequency. For example, the many Buddhas have attained mental clarity from their own skillful means, rather than being exposed to a specific sound frequency that created peace. It is clear that sound works to help clear energetic states, when used with the correct quality of attention, though we would not say that a single specific hz frequency is necessarily more effective than another. There is a lot of information about the benefits of different tunings online, and we do appreciate the efforts putting into exploring these tunings, and if you listen to them and resonate with them we do think it may be a good idea to follow that intuition. We recommend to our students to feel into different sounds, and find sounds that they really enjoy working with, rather than utilizing sounds they are told they should use. We have sound files of each tuning fork set we sell, for you to explore. Listen to the sound files, and find a sound that you relax with, or naturally sink into, or easily brings you a sense of wellbeing. A great option is getting harmonic forks, that would combine to make an uplifting harmonic resonance. Below we have discussed various harmonic sets available. In general though, as a rule, we believe simply that the true work of healing comes from within, and you should choose hz frequencies you enjoy.

There are some cases where specific hz frequencies may be needed. For example, there are many scientific endeavors utilizing tuning forks for physiological health. Scientific experiments are being conducted with tuning forks for a wide range of physical health issues, such as utilizing specific frequencies to cure Alzheimer's disease, to cleaning the Bronchial tract. In general, if you want to work with binaural stimulation such as Theta or Gamma waves, you will need tuning forks that are specific hz frequency apart. Further, if you would like to use harmonics, such as the perfect fifth, the forks needs to specific frequencies apart. Below we detail specific tuning fork sets that work well for using harmonics, as well as binaurals.

Below we go through various tuning fork sets we recommend, whose hz frequencies need to be specific in order to produce the correct result. These are tuning fork sets we’ve found to be effective, and/or to be backed by scientific and historical evidence.

Tuning forks have traditionally been made unweighted. The prongs are struck, and vibrate producing an audible tone when placed close enough to the ear, or on the body near the head. Adding weights to the end of the prongs adds some advantages. The weights create more surface area to strike the tuning forks and make them vibrate. The weights increase the vibration, allowing for more vibration to then be transferred into tissue. The weights do not decrease the volume of the fork, which can still be heard audibly if placed close to the ears or on the body near the head. Both weighted and unweighted tuning forks are excellent choices for sound healing. 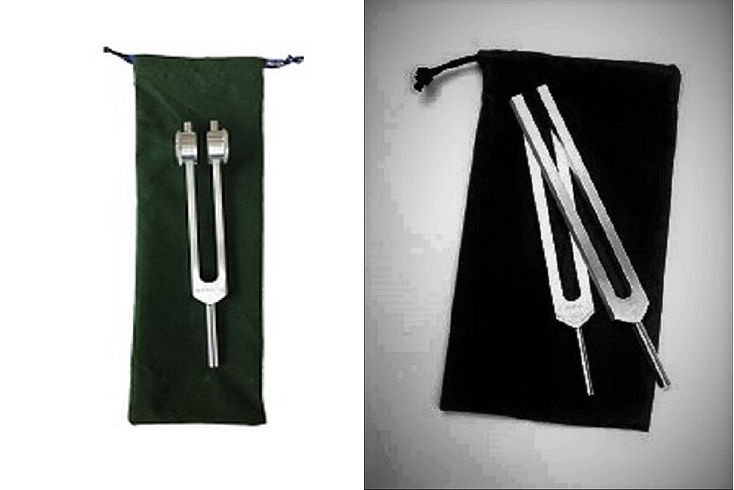 Which Tuning Forks We Recommend, and Why 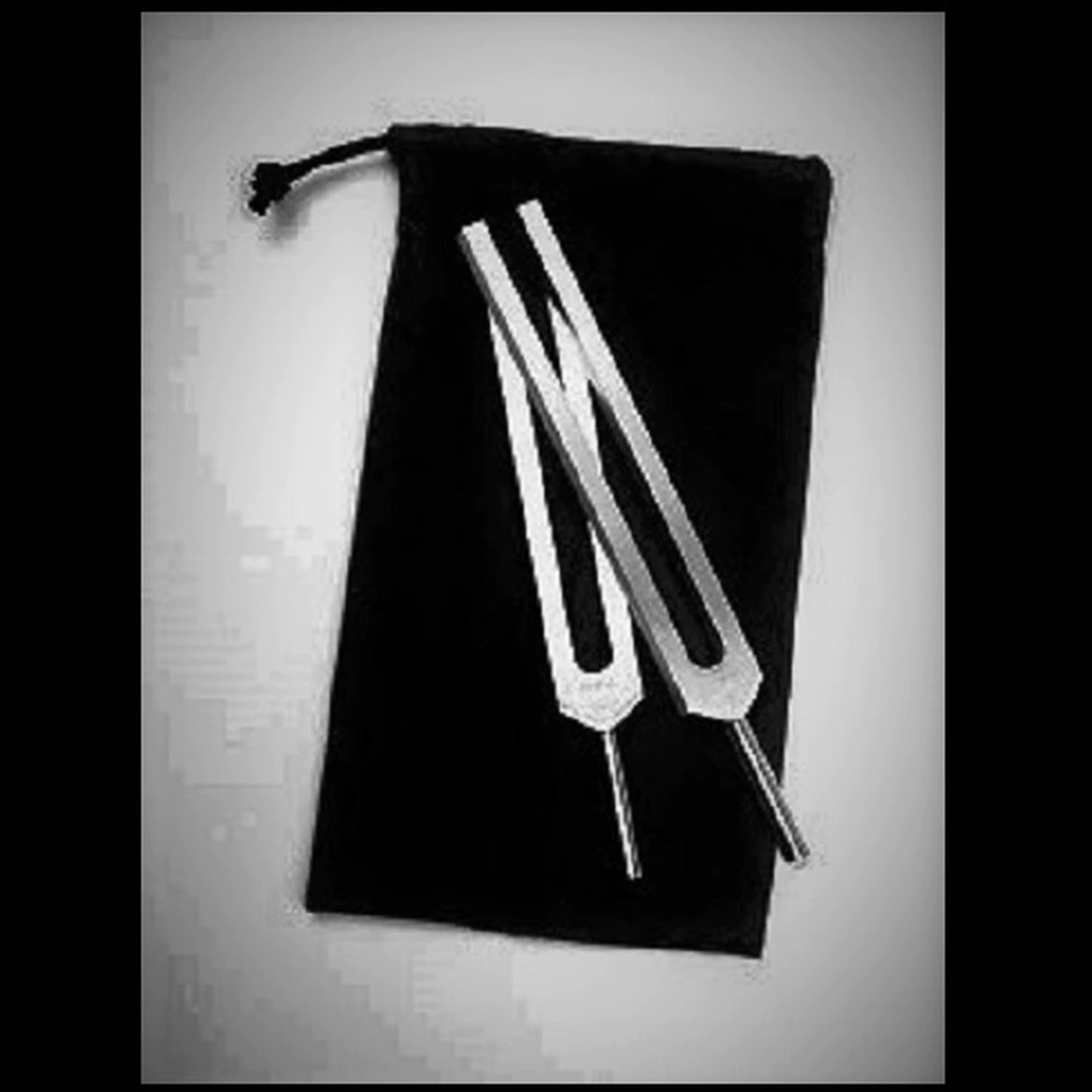 Harmonic relationships are a foundation to modern sound healing. Harmonics are simple mathematical relationships between two notes. When the notes are played together, they harmonize into an uplifted tone, and generally make us feel good. In our personal work, the perfect fifth, which represents a simple 3:2 ratio, is used at almost every meditation. It is clear from our years of work that the perfect fifth relaxes the nervous system, allowing our clients to make easily ease out of tension, into uplifted mental states.

The perfect fifth is used by many proponents of tuning forks. The Body Tuners, perfect fifth pairing of C and G, are the foundational tuning forks for the work of John Beaulieu, who has studied the effect the perfect fifth has on relaxing our nervous system, and even helping to release nitric oxide improving our circulation, giving us a sense of warmth and well-being.

There are 4 main harmonics that we use in our work, the third, fourth, fifth and octave. Each of these represented simple mathematical relationships, and come together to illicit beautifully uplifted environments to meditate in.

For harmonics, we suggest the body tuners as a foundational set of forks to use, one placed next to either ear. There is also the ohm octave set. These are two forks, one playing the historical hz value for ohm, and one playing an octave higher, which is very beautiful. Next, we sell the 3rd octave 432hz tuned set of harmonic tuning forks. Listen to the sound files of these options, and trust your hearing with what you wish to work with. 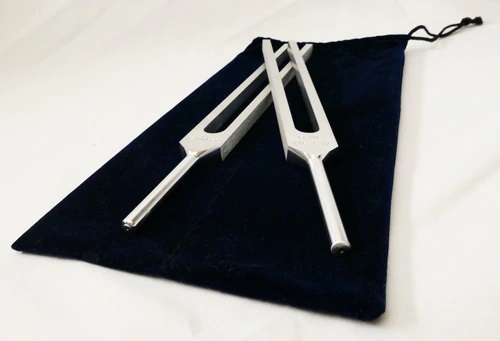 Theta, alpha, beta, gamma and delta waves represent different ranges of frequencies, that are produced and present in the working of our brain. Scientists have studied these waves produced in our brain through EEG technology, showing that different wave frequencies represent different functions of our brain. Theta waves for example are involved in daydreaming and sleep. If they are suppressed, their can be poor emotional awareness and stress. In optimal amount, theta waves can support intuition and relaxation. Gamma waves on the other hand represent the fastest brain activity, and are related with cognitive functioning.

Binaural waves are produced intentionally by presenting two tones that are specific frequencies apart from each other. Binaural wave therapies intentionally produce certain theta, alpha, beta, gamma or delta waves, in order to stimulate the production of these waves from our brain, which has shown to be effective.

We have produced our own Sunreed Gamma Wave Tuning Fork sets. The fundamental note of the set is tuned to the classical hz frequency for Ohm, followed by another fork exactly 40hz apart, creating a gamma binaural. Another option for using binaurals with tuning forks are the Brain Tuners, which have Theta, Alpha, Beta and Delta options. 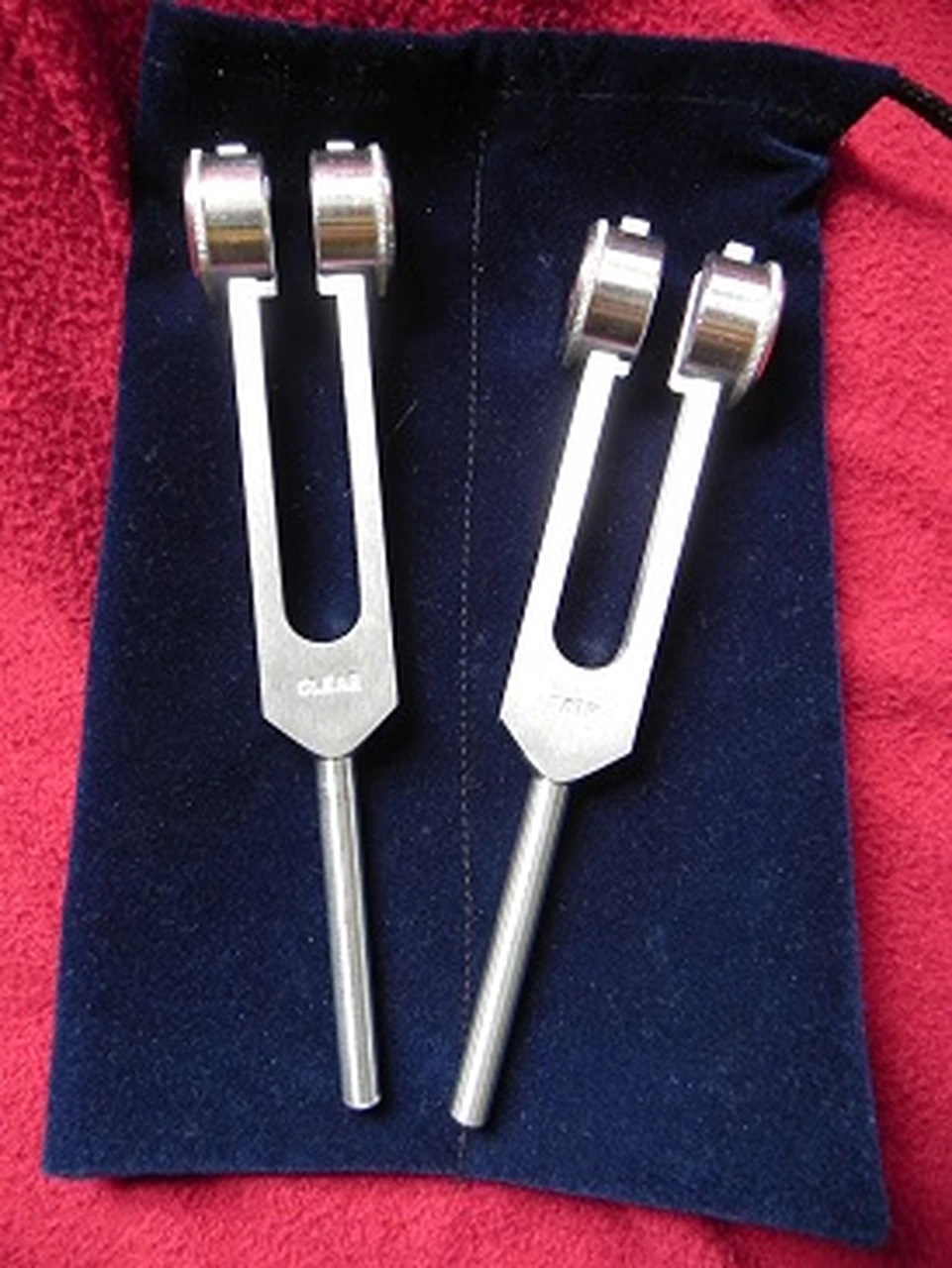 The Sunreed Clear Path set is based off of two specific frequencies, that when used together are supposed to clear the biofield of all non-beneficial energy. These frequencies were discovered by a scientist, a “biogeometrist” who has spent his life discovering how shapes literally balance biological energy fields.

From that point, we developed the clear path tuning forks, which we have been told from many people, have truly supported their lives. The tuning forks have to be used together, on the body, at the same time to be effective. 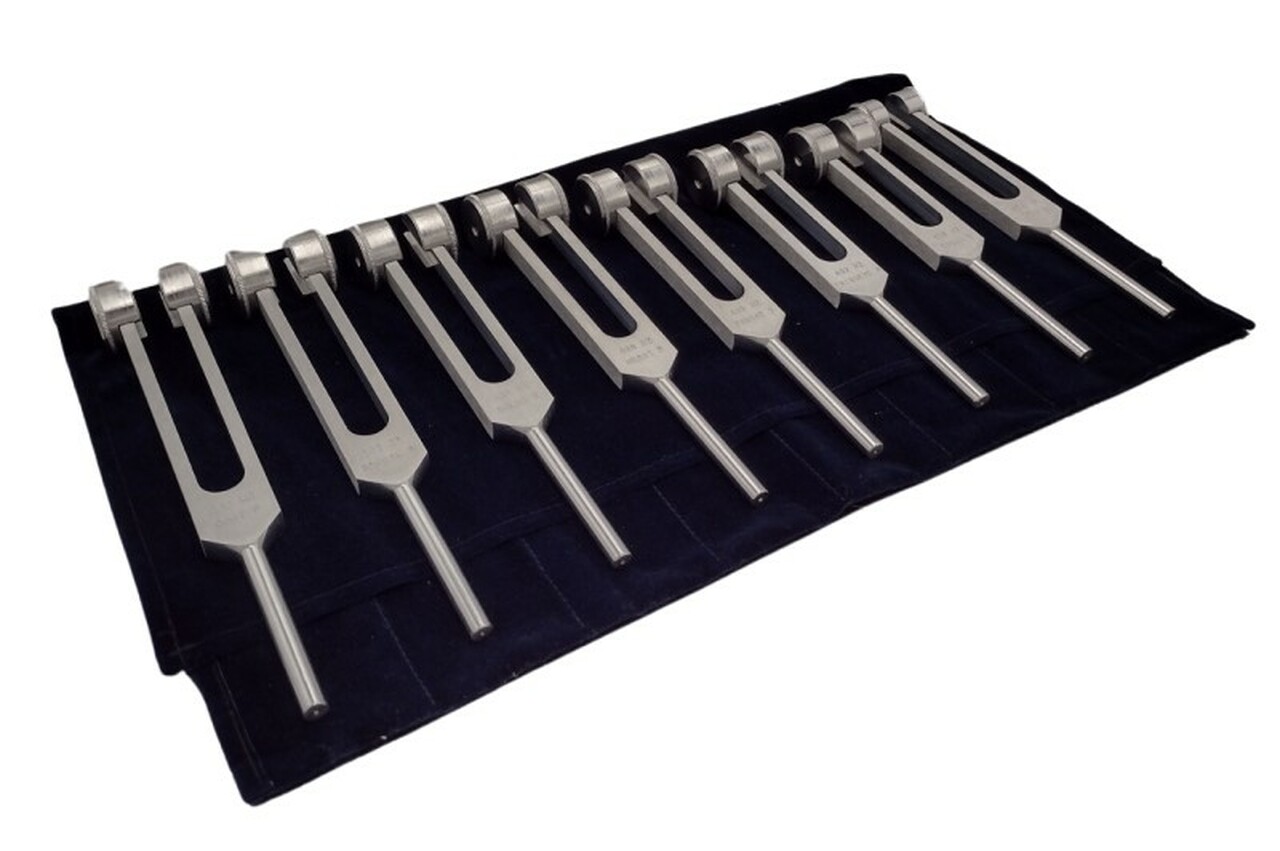 The full 8 fork set gives you many options, from the full major scale, chakra work, harmonics and binaurals.

First get the full C major scale, which is used commonly paired with each of the 7 major chakras. With the 8th tuning fork in the set, you can associate it with the 8th charka found above the Crown, the Soulstar.

While it is not true that there is a definite relationship between the C major scale and the chakras, pairing each note with a chakra can be a really helpful tool for patients in locating and working with the chakras in general.

The 8 forks as well give you far more harmonic potential then you can get from a harmonic set of tuning forks. You get for example 4 different perfect fifth pairings, with the C/G, D/A, E/B and F/C. You as well get perfect third, fourth, and octave pairings to work with.

Last, because these forks are in the 3rd octave, there are many different alpha and beta pairings to work with in the 8 fork set.

So, if you are looking for options, the 8 fork set provides for you a full range of potential for use.