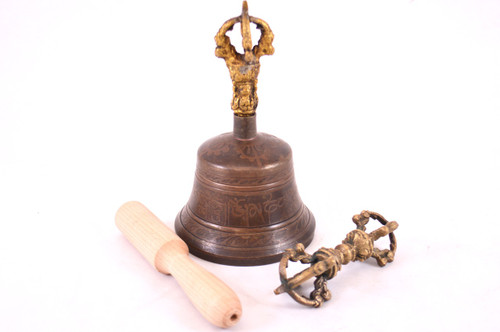 ×
Above is a sound clip of this style of bell. The sound will vary some as they are each hand cast and slightly different. This bell is hand etched with different sanskrit om symbols and designs.Â  Due to the handmade nature of this item it may very slightly from the photo. Bell: 5.75 X 3.5 Inches / Dorje: 4 Inches This item includes one Large Bell, one Dorje, and one wood striker. You can use the wood striker just like you would with a singing bowl by rubbing it around the bottom of the bell. The dorje and bell are the primary Ritual Tools of Tibetan Buddhism. Always kept together they represent many layers of intricate symbolism and meaning and are used in almost all Tibetan ritual ceremony, chanting and magical operations. Primarily dorje and bell represent the masculine and feminine principles in the cosmos and in the individuals energy body. The dorje is always held in the right hand and the bell in the left as these are the sides of the right and left channels in the body. DORJE As the archetypal male principle the dorje it is the quintessential symbol of the 'diamond mind of enlightenment' so hard that it is able to cut through all illusions and deceits and arrive at the clearlight of truth in its two forms. These two forms of truth are symbolised by the two pronged dorje and are relative truth - needed for daily living ie. science, practical knowledge etc., and absolute truth which reveals the inner nature of the universe. The central hub from which the prongs arrive represents the sphere of actual reality. From this sphere arise two eight petalled lotuses crowned by two full moon 'discs' from which emerge the five upper and lower prongs. These five represent the Five Buddha families, the five elements, and the five skandhas [form- feeling - perception - motivation and consciousness- which the outer four are curved into and merge with at the tip.] As such the dorje is the great alchemical symbol and represents the creation of the 'philosophers stone'. In Tibetan dorje means the indestructible stone. The dorje is considered the ultimate spiritual weapon in that it is used to banish the forces of darkness, ignorance and disharmony with its power of lightning and clear truth. It is held in the right hand and twirled according to the pattern of the particular ritual, where it also represents 'skilful method'. BELL As the archetypal feminine principle the Dill boo [bell] represents the perfection of wisdom which directly perceives the primordial nature of shunyata [emptiness]. Its sound describes emptiness as it the sound arises from silence and dissolves back into silence. As such it represents the mandala of creation and dissolution; the bottom rim of the bell reps the disc of emptiness from which all arises, these being symbolised by the ring of lower dorjes, the garlands of hanging pearls, the upper horizontal dorjes, all forming the base for eight seed syllables of the eight goddesses. The main feature fo the handle is the face of Vajra-para-mita, the greatest Goddess representing the union and perfection of all wisdom and awareness. From her elaborate crown rise the five wisdom jewels which form the vajra cap to the bell. Â  Â  Â