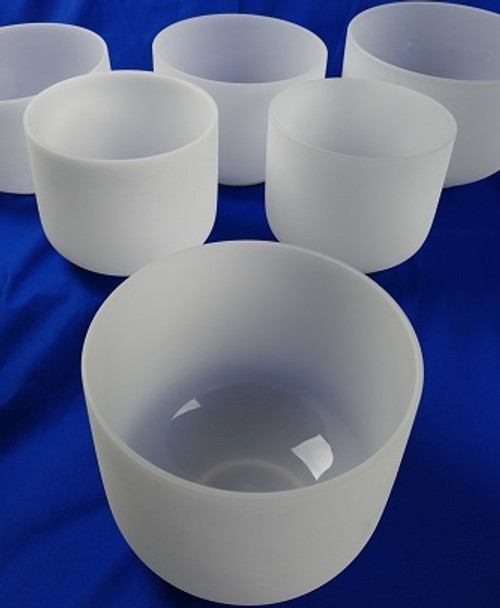 A musical mode is a type of musical progression of notes with intentional melodic and emotional behavior. Some musical modes would be appropriate to use on somber occasions, while others would be appropriate to use in celebrations. In Western music, there are seven modern major modes, all very similar to one another. They have their root in the modes of the Ancient Greeks, though have been modified over time by centuries of composers and people in power.

The seven major modes, or scales, in Western music are the Ionian, Dorian, Phrygian, Lydian, Mixolydian, Aeolian and Locrian. These scales have seven notes, and we all know the Ionian, which is simply Do-Re-Mi-Fa-So-La-Ti, or the notes C-D-E-F-G-A-B. This is the mode that all chakra sets are sold in.

Here we are offering the Aeolian mode as an alternative to the Ionian mode. An easy way of understanding the Aeolian mode, is that it is the sixth mode in the succession of the 7 major modes in music. The first mode is the Ionian, which starts on C: C-D-E-F-G-A-B. As it is the sixth mode, the scale typically starts on the sixth note of A, and follows the succession of whole notes from there: A-B-C-D-E-F-G. For ease of sizing and continuity though, we are starting all of the major mode crystal bowl sets in the key of C. See the notes and sound files below for the correct musical notes.

The Aeolian mode is also known as the minor scale in music. It is an emotionally complicated mode and can easily be used to making darker music, though the mode is not necessarily dark and ripe with meditative potential. For example, if you play the first, third, fourth, fifth and seventh, which is the C, D#, F, G, A# you get the minor pentatonic scale. The minor pentatonic scale is known world over and has been used repeatedly in mystic and meditative schools as an aid to meditation and prayer. Also, if you just feed into the Aeolian mode, it is quite simply to find yourself in a place of stillness without ground or conclusion, lost in the mystic. The complexities of the mode can be used as a coming into awareness event, that can heighten both concentration and insight.

Each set comes standard with 8 o-rings, and 8 suede crystal bowl strikers. We only provide crystal bowl sets that are in perfect incremental tuning to each other. "Incremental" means the notes actually follow the scale accurately, from lowest note to highest note, as they would on a piano keyboard, in precise harmonic intervals. So a purchase from us is also the knowledge that you will be receiving a top of the line quality set. This set is tuned to perfect pitch. If an alternate tuning is desired, Contact Us. Please also reach out to us if you have anymore questions.

The sizes for bowls are as follows. These typically won't change, but we would let you know before shipment if they were to be different: